In the blog, we discussed the unfortunate changes that the park has undergone as oil infrastructure in the park takes shape.

This week, we relate how climate change has affected the park. The impacts were narrated by a tour operator who has been visiting the park for nearly two decades.

Hippopotamuses are interesting animals. They do not have sweat glands and rely on external conditions to cool off. As such, they spend hot days in shallow water and feed at night when it is cool.

When I visited Murchison Falls National Park on July 25, 2022, I noticed something peculiar: the waters levels of River Nile, which flows through the park on its way to South Sudan, Sudan and Egypt, had increased compared to 2019 levels. The river had also burst its banks. Previously sandy and shallow areas where hippos wallowed were covered in water!

Why did the water levels of River Nile increase? On May 1, 2020, Hon. Sam Cheptoris, Uganda’s Minister for Water and Environment, addressed the country. He observed that due to heavy rainfall, the water of levels of Lake Victoria and the River Nile system had increased. The minister noted that as at April 30, 2020, the lake’s water levels had increased to 13.32 metres.

“This … rise … is only 0.08 meters away from the highest level ever recorded,” the minister said.

The minister listed the sub-sectors that would be affected by the increased water levels including hydropower stations, water transport and settlements among others.

Biodiversity and tourism were not mentioned. When I visited Murchison Falls NP on July 25, 2022, I realised that this was a great oversight. How?

Murchison falls is one of the biggest attractions in Murchison Falls NP. In the park, the Nile squeezes through an eight-metre gorge and forms the 45-metre Murchison falls. The falls are beautiful and powerful. The sound that they make is awe-inspiring.

To get a better look and feel of the falls, tourists take a waterfall boat cruise. The cruises start from two docks in the northern and southern banks of the park. Tourists decide which dock to use. The boat cruise stops about 200 metres from the bottom of the falls. At this point, the boat cannot go any further. Previously, tourists could leave the boat at this point. They would step onto a rock, view and hear the mighty falls. This rock was submerged by water and the beautiful touristic experience of getting as near to the falls as possible was taken away. 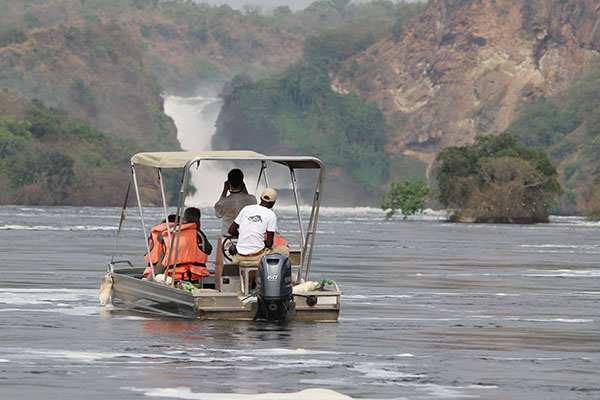 A boat ride to the bottom of the falls. A rock on which tourists stood to view, hear and take photos near the falls was submerged!

Four hundred and fifty-one (451): This is the number of registered bird species found in Murchison Falls NP. Of these, there is a curious small bird called the rock pratincole. The bird, a native African one, lives on rocks found in fast flowing rivers. The bird also breeds by laying eggs in rock depressions. Rocks are integral to the survival and well-being of these intra-African migrant birds, which feed on insects. The rock at the bottom of the Murchison Falls was an important habitat for the rock pratincole. Viewing the bird was also a pleasure for tourists. It was enthralling to see these small birds launch their flight from the rock, quickly pick flies near the falls all the while avoiding being washed away. With the rock at the bottom of the falls having been submerged, we didn’t see the rock pratincoles when I visited Murchison Falls on July 25, 2022 with tourists. Yet viewing the rock pratincole is one of the tour experiences that we widely market.

Another bird of interest in Murchison Falls NP is the red-throated bee-eater. This tropical bird is found in only 21 countries in Africa, Uganda inclusive. The bird is small and has a distinctive beautiful red throat. It feeds on bees. The bird nests/breeds near streams and rivers among others. In Uganda, the bird breeds in tall sandbanks on Lake Albert, the Kazinga channel and below Murchison Falls. Needless to say, the bird needs dry, and not flooded, conditions to breed.

In the Nyamusika plateau, nature created the perfect breeding grounds for the red throated bee-eaters and other birds. Nyamusika plateau is a clay-sandy rock that leads to Murchison Falls. The rock is soft, which enables the red-throated bee-eater and pied kingfishers to make holes (nests) in the rock and breed. Because the rock is cliff-like in nature, predators such as snakes that would eat the birds’ eggs find it hard to glide to the birds’ nests.

Unfortunately, climate change-induced flooding has affected the plateau, making it hard for the birds to nest. 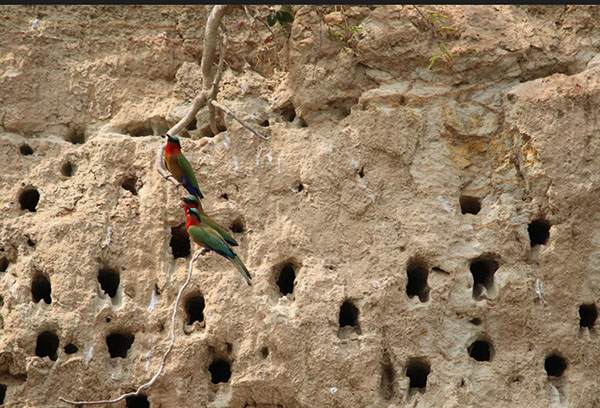 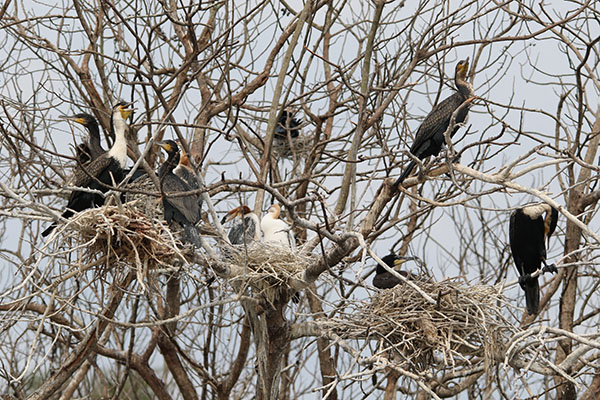 African fish eagles, long-tailed cormorants and other birds can also be seen in Murchison Falls NP. However, the trees on which they perch to nest and find food are drying up due to flooding of River Nile.

Climate change has affected habitats and breeding grounds for key species in Murchison Falls NP. Ironically, oil extraction is planned in the park with trial drills expected to start this December. Burning (using) of fossil fuels is the biggest contributor to climate change.

With oil extraction in the park being planned, it can be said that the park is going to provide a resource that could kill and bury it for good. 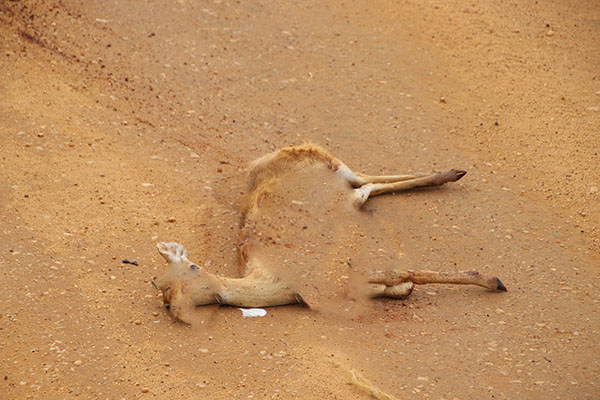 Roads through the park have also led to accidents. This Uganda Kob was killed by a construction truck near Pakuba airstrip in the park on August 6, 2022

Murchison Falls National Park (NP), one of Uganda’s oldest and largest parks, is under pressure from oil exploitation and climate change impacts.
A tour operator, who has been visiting the park since 2003, has noted changes to the park as oil exploitation infrastructure takes shape. The tour operator shared his experience with AFIEGO, which is narrated below.

INTRODUCTION
On July 25, 2022, I visited Murchison Falls NP. I own a tour and travel company. Part of my work includes accompanying tourists to national parks among other tourist sites.

Because of the COVID-19 disruptions, I had gone a full year without visiting the park. When I visited on July 25, what I saw disheartened me. How?

TARMAC ROADS
With the tourists that I was accompanying, we entered the park through the Kichumbanyobo gate in the southern sector of the park. We drove to the park using the Masindi (Kisanja)-Park Junction Road.

This is one of the critical oil roads. It goes through the park. It is aimed at supporting TotalEnergies to extract oil from the park. Ordinary Ugandans also use the road. Particularly, travelers from Western Uganda going to West Nile use the road. Some road users have reported seeing road kill such as lizards and monkeys on the road.

Previously, the road entering the park was a dirt one. This is because not only are dirt roads better for biodiversity conservation, many tourists say that dirt roads provide the real wilderness experience they are seeking.

Previously, when one entered the park using the dirt road, one felt like they were entering a nature sanctuary. With the tarmac road however, one gets the feeling that one is going to any other place, and not a nature reserve.

Experiences are very important in tourism. If Murchison Falls NP starts to feel like any other place, and not a nature reserve, then tourism in the park, which is one of Uganda’s most visited, could be hurt.

SCENIC VIEWS COVERED
Further, previously, tourists would immediately start seeing wildlife such as baboons, black and white colobus monkeys and others when they entered through the Kichumbanyobo gate.

The monkeys are arboreal in nature and could be seen in the tree canopy over the road. However, this inter-connected canopy has been destroyed due to the Masindi (Kisanja)-Park Junction oil road. The big troops of monkeys and baboons we used to see are no more. Only a few remain.

In addition, soon after the Kichumbanyobo gate, one would bypass River Sambia, a seasonal river. The river hosts crocodiles, which we would see. Today, a bridge has been built over the river. The wildlife we used to see cannot be seen anymore as the river is covered by the bridge. 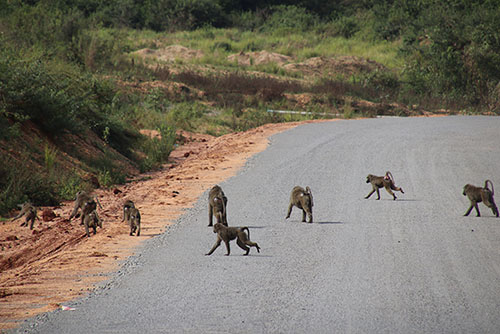 Baboons on a road inside the park. These are subject to road accidents

ANOTHER BRIDGE
A bridge, which is part of the critical oil infrastructure, connecting the south and north sectors of the park has also been built. Tourism operators requested that a suspended bridge be built. However, we were told that this bridge would be too weak.

I think a sturdier bridge to transport oil rigs, which are heavy, was needed. This bridge has eased transport between the two sectors. However, it has killed the ferry experience. Before, we would connect from the north to the south sector using a ferry. This allowed us to see scenic views of River Nile.

WATERFALL BOAT CRUISE
The waterfall boat cruise is a popular activity in the national park. The boat cruise starts from the Paraa dock and ends at the bottom of the falls.

The scenic distance between those two points is 17km. The boat ride used to take two hours. The boat captain used to ride slowly so that tourists could see the hippopotamuses, crocodiles, elephants, water birds and other biodiversity.

Because of the increased water levels of River Nile, attributed to climate change, the shallow areas where hippopotamuses used to wallow are no more. Fewer hippopotamuses can therefore be found trying to wallow in the North bank, which was the best viewing place for hippopotamuses.

Further, on the shores of River Nile in the North bank, crocodiles used to be seen sunbathing. They would open their mouths to cool off. However, the river bank on which they used to sunbathe was flooded due to climate change impacts. The crocodiles now hide in the thickets on the river bank, making them harder to see. 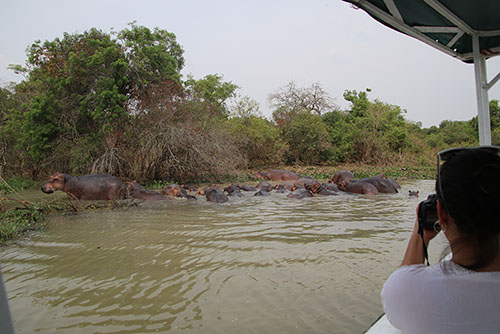 ROAD CONSTRUCTION
Some of the impacts of road construction in Murchsion Falls NP can be seen in the pictorial below. 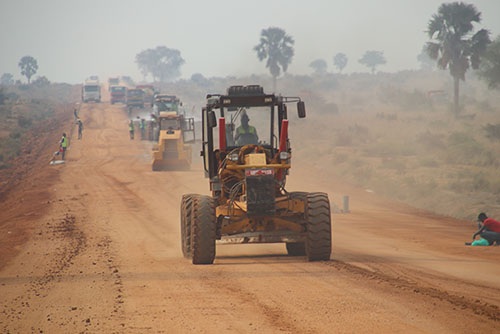 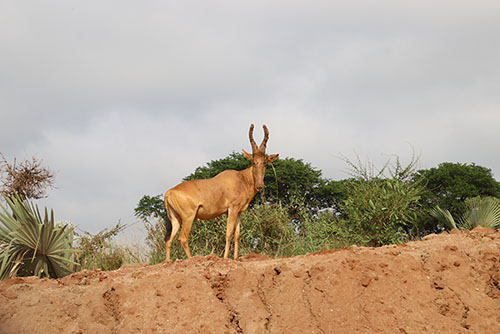 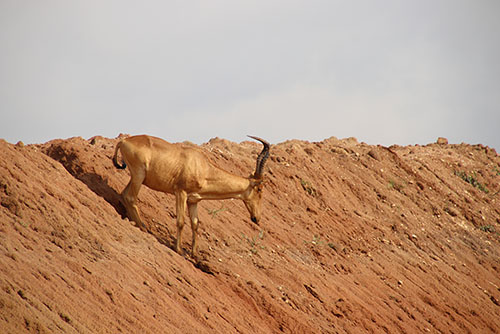 CONCLUSION
In part 2 on Thursday next week, we will show the other changes to the park. If no action is taken to address the oil exploitation and climate change impacts, the park may lose its alluring features, hurting tourism.

Tourism is a billion-dollar industry in Uganda. The sector earned Uganda $.16 billion at one point. The sector also employs over 667,600 people. Being one of the largest and most visited Ugandan parks, Murchison Falls is not only important for conservation but for the survival of tourism.

The newsletter has the following content:
This is our reality: Our rights have been abused by oil project developers
Pictorial of our activities
Lobbying
In the media
Upcoming eventsAFIEGO’s June 2022 newsletter

The newsletter was has the following content:
2022/2023 national budget review: Gov’t must invest more in green economic sectors
Pictorial of our activities
Lobbying
In the media
Upcoming eventsAFIEGO’s May 2022 newsletter

Power up the people! Address gaps in Electricity (Amendment) Bill!
Pictorial of our activities
Lobbying
In the media
Upcoming eventsAFIEGO’s April 2022 newsletter

The press statement relays the following news among others:

Through the press statement, the Bugoma forest host communities make the following demands among others:

Delayed justice: Judiciary must hear oil and environmental cases without delay to stop injustices
Pictorial of our activities
Lobbying
In the media
Upcoming eventsAFIEGO’s March 2022 newsletter

The newsletter which has the following content:
No clean energy, no poverty eradication! Gov’t must prioritise clean energy access for success of Parish Development Model
Pictorial of our activities
Lobbying
In the media
Upcoming eventsAFIEGO’s February 2022 newsletter