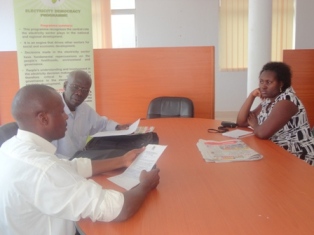 26/09/2013: As government commissioned the construction of the 600megawatt Karuma Hydro plant last month, people affected by the project are still complaining of lack of compensation.

Some 168 residents of Awoo village in Diima parish Mutunda Sub County, Kiryandongo district complain that they have never been compensated despite losing their land and valuable property to the project.
Auma Bilentina, the Awoo LC1 Chairperson and member of the affected group, says although the other affected people were compensated in December last year (2012); the remaining group has never received even a single coin.
Auma lost about an acre of land. She says according to the evaluation results, she is entitled to 1.6million shillings. The village chairperson says  although       they were promised pay in May, four months later no money has been received.
She says what worries them most is the construction work going on after commissioned by President Yoweri Museveni on 12th August 2013, yet their money is not yet paid.

“We accept development but it has brought us poverty, people cannot afford to shift, we have tried to go through the Resident District Commissioner (RDC) but he has given us a deaf ear, we wrote to the president when he came here for commissioning but they stopped us from meeting him,” she said.

According to the letter copied to the president, the energy minister, the woman MP Kiryandongo and the RDC, the people highlighted misinformation and lack of transparency in the process of compensation and they wanted the president to intervene.

William Ogik, another resident says he lost five acres of his land to the hydro-power project. Ogik says the affected part of his land hosts one of his homes, so this requires him to relocate. He wonders how he will relocate without his money being paid. Ogik claims that his neighbors are already being issued with eviction notices despite lack of pay. He says that some who were compensated received little money in installments via mobile money.

Ogik claims the project consultants with Infratech Private Limited, a company hired by government for consultancy on project designing, said residents will be compensated with in two weeks’ time from the day of the project commissioning, however nothing has been done.

“What if i don’t find my rightful money on my account when even construction has started? Where and whom will I run to?” wonders Ogik.

While, as Auma and Ogik pointed out, the issue of electricity and energy is a critical one for Ugandans who ought to support the project for its potential to increase power supply, investments and agriculture production, it should not be at the expense of the human rights and livelihoods of the ordinary man and woman. The typical African story, when it comes to development projects such as these, is that the local communities end up more impoverished than before. Vulnerable groups like children, old people and the disabled are particularly at risk when such projects fail to consider the long term effects on humanity and focus only on potential benefits.

The proposed 600MW Karuma hydro electric plant requires over 465.52 hectares of land in Karuma, Nora, Awoo and Akurudia villages in Kiryandongo district. This has started to affect an estimated total of 414 families and Wildlife reserve.

This story would be compelling enough if it were only Ogik and Auma’s. But it isn’t. A 78-year -old blind and childless Moreen Aryem says her house was demolished and she has never been compensated.  Right now, she has no place to go after her neighbors where she used to be taken care of also left.”I need to be compensated, they promised to build me a house, now I have no house, I only take porridge and my neighbors left me behind,” she cried out.

Most people in the area continue to live in uncertainty and frustration. Some have received only partial compensation and are not sure when the rest of their money will arrive. The government compensated them for crops and promised compensation for their land and houses later! These are poor people living in the villages and, like the rest of the country, contending with high costs of living.  They are worried because most have already used piece-meal compensation to meet basic needs. By the time they receive the balance, it will not be enough to buy them another piece of land and build them houses. The already low compensation, especially when not paid in a lump sum, puts the residents in at a dead end where they give up their homes and have nothing to show for it.

Moreover, the prices of land in the neighboring districts have gone up due to high demand and high expectations. Those selling believe the affected people have been offered a huge amount of money by the government and want to cash in by selling at hiked prices.

Is there any hope?

On 1st May 2012, some of the project affected people of Awoo village, with support from AFIEGO, filed a petition in the Electricity Disputes Tribunal against government, challenging the low compensation rates for their property. As a result, the government Chief Land Valuer approached the people for negotiation and possible consensus. Unfortunately, to date technicalities still stand in the way to justice, but the fact remains that some of the Karuma project affected people are still in a state of uncertainty and frustration.

However, Government has variously described anyone who challenges such projects as being regressive and anti-development. Residents report that they have been made to sign compensation documents whose implications they do not understand or else risk losing their property without any compensation. They are also told not to disclose their compensation to one another as they are being offered different compensation rates. This lack of transparency has denied people an opportunity to speak and negotiate together to strengthen their voice in the bargain for fairness and justice.

Discouraged by the challenges of seeking compensation, other project affected people chose the resettlement option offered by the Ministry of Energy and Mineral Development. Matovu Bukenya, the spokesperson in the Ministry, explained how the scheme is supposed to work saying that those who prefer resettlement should identify plots on which government will build for them. But to date, the location and parameters of these plots are still unclear and the people are not certain where they will move next, despite the presence of contractors on the site. They have seen the suffering that those who accepted compensation are going through and therefore would never opt for this. Now, they await their fate and their lives depend on the mercies of the government.

They are also worried that moving to another area will mean foregoing the potential benefits that will accrue when the construction starts and after the dam is complete- Like better jobs and reliable electricity respectively. Crossing the Nile to the other side would mean they sacrificed for the project but are not guaranteed any direct benefits.

What the law says

The Land Acquisition Act Cap 226 is also very clear on the requirement to fairly compensate those whose property is compulsorily taken by government. The law has interpreted fair compensation to mean an amount that would be offered by a reasonable seller and accepted by a willing buyer. Yet, the current rates offered to the project affected people do not reflect this fair compensation principle. Instead, government is twisting the arms of the people into a position where they have no choice but to comply with whatever the government decides.

Even with such outright injustice, the people cannot access courts of law because of the high fees they cannot afford- thanks to their dilapidating poverty and crippling lack of knowledge. It is hard to imagine a graver human rights violation than one that involves stealing the very existence of a community, a home, a family, without as much as an effort to ensure they have something to look forward to after their sacrifice for the good of their country.

The solution to the problem begins with real government commitment to address the plight of project affected people. All-in promises and piece meal compensation will not do anymore. Neither will bullying and threatening, for the success of a project which depends largely on the support of the locals.

Government ought to listen and investigate the grievances of the people; using an independent and objective body, and act accordingly where they hold merit.  Government officials who are found to act outside the law in the process of valuation and assessment should be brought to book.

Also, the ground should be leveled for proper negotiation and assessment. Government’s attitude and the feeling that compensating these people is some kind of favor rather than a legal right is a violation of the human rights and dignity of people who are prepared to give up their property for the good of development. Such negotiation should be followed with clear agreements translated in local languages and explained to the people before signing them. Transparency is of the essence and government should ensure that everyone gets equal compensation for equal land so that justice is not only done but seen to be done.