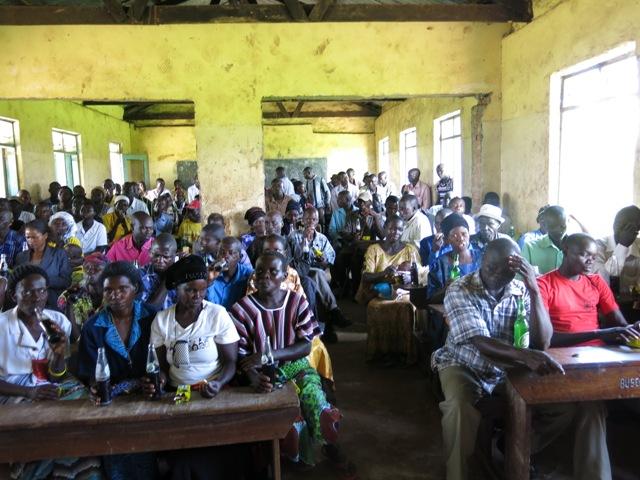 Introduction :The Africa Institute for Energy Governance (AFIEGO) in partnership with Refinery Affected Residents Association organized a  half day meeting with the refinery affected people of Kabaale parish, Buseruka sub-county Hoima District. The meeting was  organized under the theme: Understanding the nature of compensation from government and the need to defend  your property rights. It brought together over 30 refinery affected residents’ whose case that was filed in the High Court and  is still  waiting for determination. The main objective of the case is to compel the government to stop forcing the affected  people from  accepting and signing for inadequate and unfair compensation and resettle those who asked for land within a  period of three  months.The objective of the meeting was to discuss the emerging issues in the communities and update the residents on the  progress of the case. The meeting followed a visit by officials from the Ministry of Enery and Mineral Development (MEMD) and  Strategic Friends International (SFI) – the company working with MEMD to implement the Resettlement Action Plan for the oil  refinery which includes compensating the affected people. Following the visit, it was reported in the media that the people who  had filed the case had changed their mind and were now willingly signing the compensation documents to receive the money  that they had originally rejected.The stories created an impression that the affected people were no longer interested in the  case. It is in response to the above stories that AFIEGO and partners organized the meeting in the affected villages to share  with the people.

In the meeting, the affected people indicated that the MEMD and SFI were in Kabaale five days ago telling people that they were being given the last chance to sign and get compensation. That if they didn’t sign, they would be evicted without compensation after all their case had been dismissed. They also indicated that 2 members had signed on the compensation documents due to unbearable suffering. Their kids had spent over two and half years without going to school, their grass thatched houses had collapsed and many other problems.
In response, AFIEGO lawyers explained to the residents that the case against government was in court for determination and they were working hard to get a new hearing date. The participants were encouraged not to be bullied into signing for unfair compensation but to keep strong and wait for court decision. From the deliberations the participants made the following observations:

Observations
1. The government of Uganda is taking advantage of their desperate sorry state, to trick or force the participants to sign for unfair and inadequate compensation which they had earlier protested as a violation of their constitutional right to prompt payment of fair and adequate compensation.
2. The participants observed that it has been more than two years of suffering and uncertainty since the cutoff date in June 2012 when government stopped them from using their land. The people have since not been able to conduct any form of development, including cultivation of perennial crops, depriving them of livelihoods.
3. Further still only two people among those that filed a case against government signed for the unfair and inadequate compensation but this does not mean that the constitutional violations had been addressed. In any case, the people signed not because they liked the compensation but because of suffering.
4. Government is using isolation and misery to force the affected people into signing agreements that violate their rights: The participants observed that even those who signed only did so to save their lives. What some people want now is to minimize the damage by accepting anything from the government to struggle and start a new life.
5. Physical and psychological suffering :Participants noted that those who had rejected the inadequate compensation as well as the ones who opted for resettlement have been isolated and live in bushes .They do not have access to basics like clean water, health centres, schools and markets.
6. Schools turned into police stations: It was observed that the only two primary schools at Nyahira and Kyapaloni in Kabaale had been turned into police stations for the last two months. This ended the little hope they had that the government would rethink and improve the education for their children. They observed that the government was no longer considering them as citizens.
7. Affected people still committed to soldier on in court: Participants emphasized that they are still in court and committed to soldier on until they get justice. They are ready to pay the cost. They are confident that court will give them justice and will protect them from further violations.
8. The participants noted that the move by MEMD and SFI to take the advantage of people’s misery and suffering to force them into signing on the agreements that violate the right to prompt, fair and adequate compensation is absurd and unfortunate. It is an assault on the Constitution and every good Ugandan should fight it. That evil will never prevail against right.
After the discussion and appreciation of the challenges affecting the refinery people, the participants made the following recommendations for action:

1. The government of Uganda should respect the rights of the refinery affected people to prompt payment, fair and adequate compensation by immediately compensating them at a prevailing market value for their land and crops and resettle those who asked for relocation.

2. The High Court of Uganda should determine the refinery affected people’s case expeditiously because justice delayed is justice denied.
3. Respect for court process: the government/MEMD and SFI should respect the court process by avoiding issuing of statements in the press that people had abandoned the case.
4. The Government should drop the plan to amend Article 26 of the Constitution or any other plan that has an effect of undermining the rights of Ugandans. Similarly the proposed amendment should be rejected by Ugandans as will increase the violations to property rights in the country. Since it is because of the case that now the government wants to amend the Constitution to give herself powers to exercise the powers of compulsory acquisition before payment of fair and adequate compensation.
Conclusion
We shall continue to be at the fore front of defending respect for human rights, and stand with the refinery and other affected communities until they get justice. We appeal to the courts to ensure that cases of human rights are given priority in hearing because they are the core of human dignity.
Signed
1. Dickens Kamugisha, AFIEGO
2.Kiwedde Geofrey ,chairperson Refinery Affected Residents Association