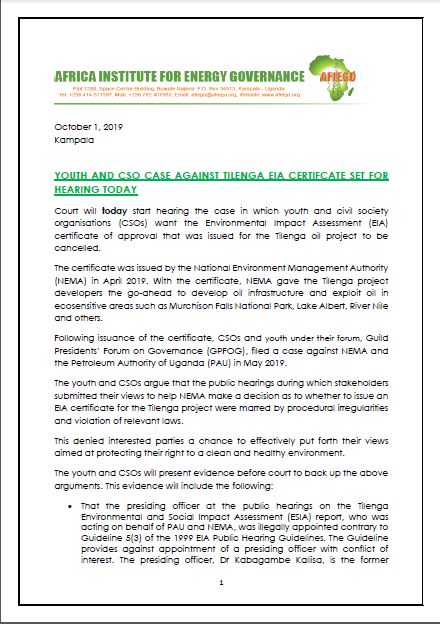 We would like to notify you that the case in which youth and CSOs want the Environmental Impact Assessment (EIA) certificate of approval for the Tilenga oil project to be cancelled is going to be heard today in the Kampala High Court today (October 1, 2019).

Oil case on the disclosure of Production sharing Agreements, 2012

On March 28, 2012, AFIEGO with support from Open Society Justice Initiative and other CSOs that included Navigators for Development Association (NAVODA), Buliisa Initiative for Rural Development (BIRUDA) and World Voices Uganda (WVU) under Publish What You Pay Uganda-Bunyoro Chapter presented a case to High Court at Nakawa demanding for the disclosure of oil Production Sharing Agreement (PSAs) and a declaration that these are public documents which every citizen should have a right of access.The case was dismissed; however this caused the tabling of PSAs to parliament, though there were restrictions on accessibility of these PSAs.

Filed by 2000 Ugandans, the case seeks to declare the actions of players in the electricity sector and the government in not disclosing agreements, using defective meters and suspicious billing systems; a violation of human rights. Filed in 2010, the case has since been overtaken by events, including the establishment of a tribunal to handle complaints in the sector, the sharing of the agreements of electricity companies and the replacement of the old billing systems with pre-paid metres, the famous yaka. When AFIEGO filed the case in 2010, players in the electricity sector were forced to carry out these reforms. The case increased public outcry against the injustice meted by government and electricity companies.

Still, issues in Uganda’s electricity sector are still numerous. The latest being an Ad hoc parliamentary committee recommendation that Umeme’s contract be terminated for fraud and failure to deliver the promise of turning around the electricity sector in Uganda. The Salim Saleh report made a similar recommendation in 2012. There have also been complaints about the yaka pre-paid meters and people have been forced to adopt them. There has been over billing on these meters and controversies abound on whether or not they meet international quality standards. The complaints today are strikingly similar to the ones raised by AFIEGO and members of the public in 2010, a sign that the case still holds a lot of water.

Unfortunately, Justice Zehurikirize who has been handling the case was transferred and is now set to retire. Adjournments have been many and the fate of the case now hangs in balance as does the right to electricity for Ugandans who have been supplied darkness for too long. The case presents a unique opportunity for the courts in Uganda to decide on the legitimacy of access to clean energy and electricity as a human right – an area that is still being debated even at international level. This is a case that involves the people, a case concerning electricity and its central role in driving the economy. We expect that the judiciary will deliver justice to the 2000 Ugandans that have waited for the decision for over three years now.